â€œIf I were, even now, without either a dog or a horse in my keeping, I should feel I had lost contact with the earth.â€ â€• Beryl Markham, West with the Night

Depicted on a U.S. stamp.

ï¿¼Buffalo. Just the word conjures up images of shaggy beasts in herds that once roamed the open plains of North America. Legendary in the American culture, the species is properly known as â€œbison.â€

The soft winter undercoat of the buffalo creates an exceptionally soft and strong yarn. The Buffalo Gold â€œEarthâ€ (90% American bison down, 10% nylon), a two-ply weight (shown above, left) is seen here with â€œGarnet Luxâ€ (45% American bison down, 20% cashmere, 20% silk and 15% Tencel), laceweight. The soft puff of bison down (above right) is an ounce of roving. The work in progress swatch sample of â€œEarthâ€ knit up so beautifully (using on Signature â€œstilettoâ€ point needles), that our knitters literally did not want to put it down. So the WIP went along for a ride. 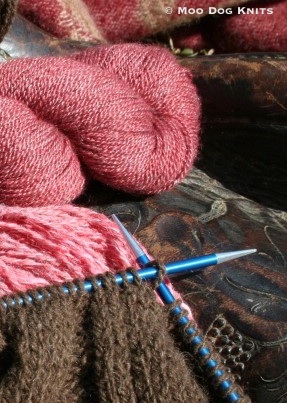 Work in progress. Knitting with Buffalo Gold yarn seen here on a saddle, after time riding in the saddle.

Editorâ€™s Note: This story originally appeared in a series on exotic and luxury yarns and entrepreneur profiles, which includes yak, possum-Merino, qiviut (muskox) and blends, cashmere, silks. The includes feature about the founder of Signature needles and a precision manufacturing company that creates aviation-quality American-made circulars and straights.