Tweed. There’s a reason for loving it and that may be a personal preference for practical reasons. 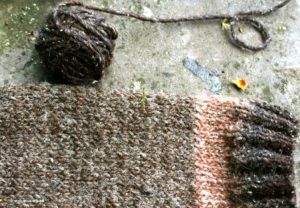 When knit up, the resulting garment can take shed hair, slobber, thorns, hay – life around around dogs, horses, children. Depending on the yarn chosen – it also wears like iron.

Research reveals the origin of the word tweed is murky – named for a river in Scotland, a corrected penciled word – no mind. According to Merriam-Webster, origin and etymology of tweed is ” probably short for Scots tweedling, twidling twilled cloth. First Known Use: 1841.” Then found this on Naturally Scottish: “The browns and fawns of Harris tweed were produced from a closely-related group of lichens called crottle.” There’s an uncommon word to chew on. Here’s the Merriam-Webster definition of crottle: “Any of several lichens from which dyes are made; especially a member of the genus Parmelia that yields reddish brown or purple dye.”

On walks, lichen is a common sight. Whether the species seen is crottle needs further study. This is intriguing though – Parmelia saxatilis, one of those known as “crottle”, gave a deep red colour and distinctive scent to older Harris Tweed.” That’s from Wikipedia about Harris Tweed – and it’s not the color part – rather the mention of scent. Next question, and you can also type it into a Google search: what does wool smell like when dyed with lichen? (Not getting into the original process which, um, is aromatic for other ingredients.)

A blog called 44 Clovers of Blogspot by Rachel Bingham Kessler (her love of lichens and results of dyes well worth reading) yielded this – “The smell was like the best woodsy smell I remembered from my childhood springs. The color was that of root beer.”

Wool dyed with a natural phenomenon that grows with symbiosis and results in a scent of outdoors to knit up. Just about perfect.