The blur at the right of the second image is an obsessed Boston terrier. Her laser-like focus on a toy is a tangible energy. Her favorite is a lacrosse ball. Which must be placed in the “that’s all” spot when her morning routine is done. The orca is a distant third runner-up, due to the noise it makes. 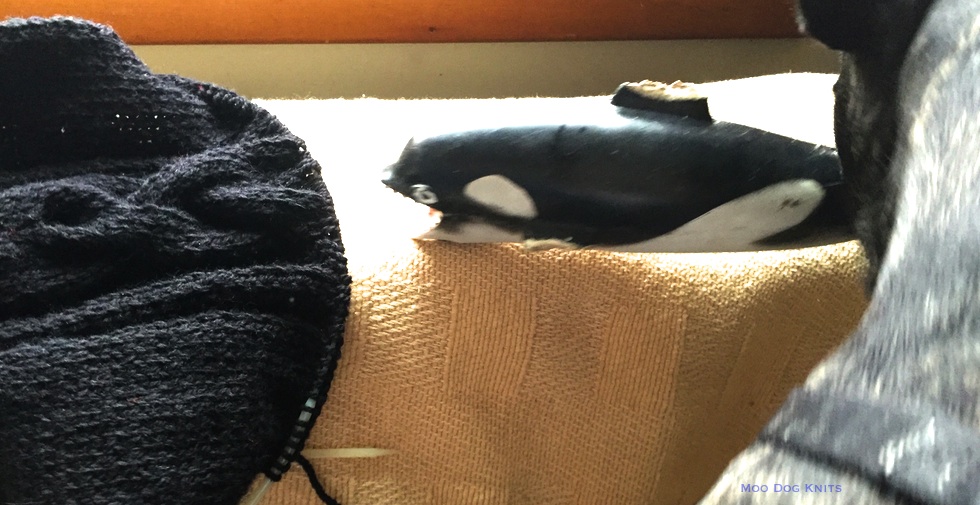 So back to knitting; is it for process or product? Both. The journey is as wonderful as the results – garments that come off the needles. This work-in-progress is one of two black wool cabled sweaters – one knit for a miniature pinscher that lives in Virginia; another larger one for Chet Baker, a Boston terrier who calls Ohio home. After a day of wrestling with words and ideas to get them out of the head and pinned down onto a page – electronic or printed – it is then soothing and beneficial to pick up the needles and yarn.

Like walking, the physical effort unwinds. Even during a blizzard that was really a January snowstorm, despite the incessant hype and hoopla from devices that can display the weather and news. But just look up. The sky and changes in the world outside – added to observations about how livestock and animals respond – will tell much about impending weather. Storm coming. Storm here. Storm over.